The impact of the First World War on a small community

Tales passed down through families will be vital to project

By Joanna Gavaghan (text reproduced from The Longrdige News, September 21, 2016)

Villagers researching the impact the First World War made on their community have been awarded a grant of more than £4,000.

Clive Thompson, chairman of Chipping Local History Society, which has been awarded £4,400 from the Heritage Lottery Fund’s Then and Now project marking the centenary of the First World War, says everyone is delighted with the news.

He said: “We are thrilled to have received the support of the Heritage Lottery Fund which will no doubt be of huge benefit to the whole community in understanding how past generations in the area dealt with radical changes in society, particularly in this case, village life.”

The aim of the project is to research and explore the stories behind the names commem-orated on the village War memorial and the effect the war had on the local community, particularly on the women and children and also on farming and industry.

Those who served in the armed forces and returned to live in the community will also form an important part of the project.

It will enable local people of all ages who are interested in preserving the memories and heritage of those who lived through the war to come together. They will be invited to volunteer to seek out photographs, letters, newspaper clippings, documents and keepsakes    for   copying   from 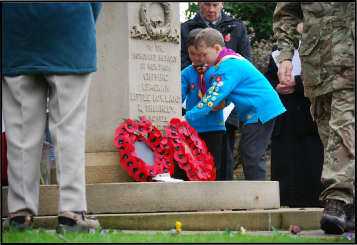 families and friends of those named on the War Memorial and of those who returned from the war.

Family tales passed down the generations will be important in building a clear picture of what village life was really like at the time. Society members will visit the Lancashire Archives to learn research skills, Preston’s Harris Library and Museum and local military museums.

With help from professionals information gathered will be digitally recorded and an on-line inter-active archive will be created which everyone can access and contribute information.

The results of the research will be available for future generations through the society website, booklets, indexes     and     a    ‘Chipping

Information boards will be used for exhibitions in the Community Hall and Village Hall.

The society will continue to engage with local groups, in particular the two village primary schools.

Sara Hilton, head of the Heritage Lottery Fund North West said: “The impact of the First World War was far-reaching, touching and shaping every corner of the UK and beyond.

“We have already invested more than £45m in commemorative projects, including community projects like this one, which will enable people to explore and record their local wartime history and commemorate those from Chipping who were affected by the conflict.”

Chipping Beavers lay a wreath at the Chipping War Memorial on Remembrance Sunday in 2016. The project will research and explore the stories behind the names on the memorial.    (Picture by  Paul Durham) 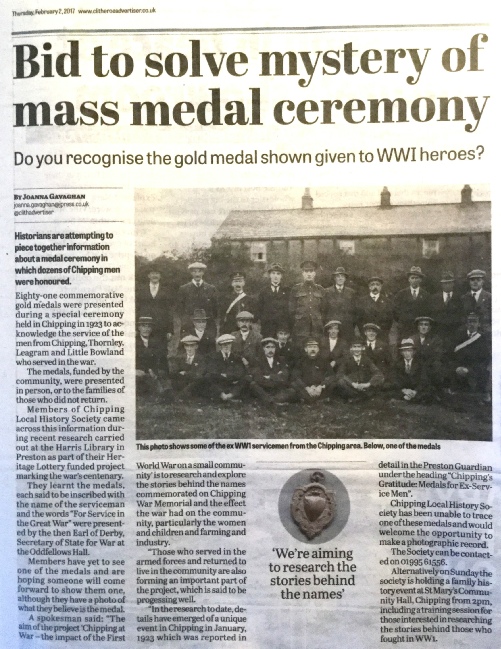 At the February open Sunday, members were delighted by the response to the appeal, when family members of three recipients attended with their inscribed medals.

The Society members were able to present information on the background of the medals and the details of the presentation ceremony, whilst the family members told fascinating stories about these brave men who survived the war.

As part of the Heritage Lottery project, Chipping local history society will be producing two book-lets and the first of these will give details of all the Chipping soldiers who lost their lives in WWI. It will be titled:

In memory of the young men of Chipping who gave their lives during the 1st World War.

This is a quiz for children which will start and finish at Brabins Shop - quiz sheets will be available from the beginning of August.

In memory of the young men of Chipping who gave their lives during the 1st World War.